Kansas City plans to treat the roots of about 12,000 trees on city property, spending about $80 a tree for protection that lasts up to three years. Once taken up by the roots, the insecticide travels up the trunk under the bark—which is exactly where the beetle larvae do their damage, feeding on the wood and boring tunnels that interrupt the flow of water and nutrients through the tree.

Since the insecticide has to be reapplied every few years, it may not be economical as a permanent solution. But by preventing all the ash trees from dying at once, it would at least buy the city some time to replace its canopy and give its local partners time to create markets for beetle-killed ash products.

At a total cost of nearly $100 million for the city, even a one-time application of insecticide is a costly investment. “You have to look at the environmental, economic, and political benefits of a live tree,” Lapointe says. Tree-value calculators show that trees save millions of gallons of water from entering cities’ storm-water systems.

Years ago, the situation looked far more grim. Treatments cost hundreds of dollars per tree, which meant that cities didn’t even think about treating the trees.

If there’s any good to come of this latest epidemic, it’s this:

In the void left by the vanished ashes, cities nationwide are planting more diverse species than ever before. Fort Wayne, for instance, has instituted a “Shading Our City” management plan that doesn’t allow more than 10 percent of any tree species to be planted in one area. Tinkel wants his city’s forest to be able to cope with future pests, blights, and climate change.

Fun quiz from the folks at Quartz. I beat it, though barely—some toward the end are pretty tricky.

Cara Giaimo, reporting for NOVA Next:

By turning hundreds of these acres back into prairie, Slaybaugh aims to mitigate the airport’s environmental impact. As part of a recent sustainability initiative, Dayton International Airport compared the potential carbon footprint of different land uses and found that rewilding would put them in the black: for every acre they switched from farmland to prairie grass, they would eliminate about 66 tons of greenhouse gas production. Add that to investments in alternative energy and green building materials, and Slaybaugh hopes the whole property will soon be “more sustainable and more resilient.”

This big new swath of prairie will provide homes for meadowlarks, bob-o-links, and other small songbirds that require at least 100 acres in order to nest successfully. It may also keep away other birds that threaten aircraft safety.

A jury of architects and real estate investors awarded Bosco Verticale the “International Highrise Award”. The project, they say, is a “role model” for other densely populated areas. I respectfully disagree.

(Perhaps not coincidentally, the jury chair won the last installment of the prize for his high-rise in Sidney. It has a handful of trees on a roof deck, though they are heavily sheltered by tall panes of glass.)

Photographer Scott Strazzante spent years documenting the why and how of the farm-to-subdivision transition. Having seen both the before and after several times while growing up, his photos are particularly poignant.

Siri Carpenter interviewed me for The Open Notebook, a fantastic resource for journalists—professional and aspiring—that helps lift the veil on the craft. Head on over if you’re curious about what I do during a typical day.

Three years ago, the world was wowed by the advances in building artificial leaves—essentially solar cells that convert water and sunlight into energy. Reality fell short of the promise, but, as Phil McKenna reports for Ensia, there may be new hope for the promise.

Google’s boldest energy move was an effort known as RE<C, which aimed to develop renewable energy sources that would generate electricity more cheaply than coal-fired power plants do. Sätt in pengar med Trustly. The company announced that Google would help promising technologies mature by investing in start-ups (casinofinder.io: trustly casinon) and conducting its own internal R&D. Its aspirational goal: to produce a gigawatt of renewable power more cheaply than a  betalningsmetod på casinot coal-fired plant could, and to achieve this in years, not decades.

Unfortunately, not every Google BankID casinon moon shot leaves Earth orbit. In 2011, the company decided that RE<C was not on track to meet its target and shut down the initiative. The two of us, who worked as engineers on the internal RE<C projects, were then forced to reexamine our assumptions.

At the start of RE<C, we had shared the attitude of many stalwart environmentalists: We felt that with steady improvements to today’s renewable energy technologies, our society could stave off catastrophic climate change. We now know that to be a false hope—but that doesn’t mean the planet is doomed.

Brad Balukjian, reporting for NOVA Next:

Only 40% of Americans attribute global warming to human activity, according to a recent Pew Research Center poll. This, despite decades of scientific evidence and the fact that Americans generally trust climate scientists.

That apparent cognitive dissonance has vexed two scientists in particular: Michael Ranney, a professor of education at the University of California, Berkeley, and Dan Kahan, a professor of law at Yale University. According to both, we haven’t been asking the right questions. But they disagree on what, exactly, those questions should be. If one or both of them are right, the shift in tone could transform our society’s debate over climate change.

China is in the midst of a land boom. Not of the real estate kind, but the ocean-dredging, reef-filling, artificial island kind. It’s all part of the country’s push to establish a claim to vast portions of the South China Sea, and the BBC has a fantastically-detailed multimedia piece on the island building efforts.

As researchers delve into this world, they’re uncovering some surprises—like the unusual nitrogen cycles caused by homeowners raking up leaves in the fall, or the fast-growing urban trees. (BU ecologist Lucy Hutyra isn’t sure this is such a good thing: “Trees may be growing faster, but they could be dying faster,” she points out.) They are also, gingerly, suggesting that this gives us a new way to think about the future of cities. Living systems don’t just exist: They evolve, responding to changes in the rules that govern their existence. And as we try to design more sustainable cities for the future, understanding the full picture of urban ecosystems just might give us a smarter way to shape them.

While the study of urban ecology is old hat to regular PSM readers, Humphries’s piece is a great overview of the field, covering some genuinely interesting research.

My colleague Allison Eck and I assembled a map of the presumed locations of the accidents that led to the disappearance of the 28 passenger planes that have vanished since 1948.

A report scheduled to be released Tuesday about preparing Boston for climate change suggests that building canals through the Back Bay neighborhood would help it withstand water levels that could rise as much as 7 feet by 2100. Some roads and public alleys, such as Clarendon Street, could be turned into narrow waterways, the report suggests, allowing the neighborhood to absorb the rising sea with clever engineering projects that double as public amenities.

Mr. Musk’s Tesla makes cars, but it also—in the not too distant future—will make batteries. Lots of them. Tesla is building a $5 billion “gigafactory” in Nevada for batteries. A factory so large that it will, says Mr. Musk, be larger than the whole of Earth’s current capacity for manufacturing lithium-ion batteries. Most such batteries currently go into phones, tablets, laptops and other mobile devices.

At the conference Wednesday, Mr. Musk disclosed that a portion of the gigafactory’s capacity will be set aside for building “grid-scale storage.”

In other words, Tesla is going to continue its tradition of manufacturing battery packs for SolarCity, only on a much grander scale.

Dennis Dimick, who led National Geographic’s “7 Billion” series, breaks down what 11 billion people will mean for ecosystems, economies, and society as a whole.

After years of everyone growing comfortable with a global population of 9.5 billion, a new study claims we’ll fly right past that. Damian Carrington, reporting for the Guardian:

The work overturns 20 years of consensus that global population, and the stresses it brings, will peak by 2050 at about 9bn people. “The previous projections said this problem was going to go away so it took the focus off the population issue,” said Prof Adrian Raftery, at the University of Washington, who led the international research team. “There is now a strong argument that population should return to the top of the international agenda. Population is the driver of just about everything else and rapid population growth can exacerbate all kinds of challenges.” Lack of healthcare, poverty, pollution and rising unrest and crime are all problems linked to booming populations, he said.

So what changed? Our assumptions about the rate of population growth in Africa. Fertility rates there fell in the 1980s, but the trend hasn’t continued as many expected. And, more darkly, HIV/AIDS hasn’t claimed as many lives there as once projected. Combined, sub-Saharan Africa will hit 5 billion, according to this new study.

But the situation could change dramatically if education and access to contraceptives improves. (Women who attain higher levels of education tend to have fewer children; contraceptives, well, the effect is obvious.) If couples had on average 0.5 fewer children, the world population could drop to 6 billion, a number last seen in 1999. But 0.5 more per couple and it could spike to over 16 billion.

At least 150 major companies worldwide — including ExxonMobil, Google, Microsoft and 26 others in the United States — are already making business plans that assume they will be taxed on their carbon pollution, a report out today says.

It seems like national governments will be the last ones to act.

A global commission will announce its finding on Tuesday that an ambitious series of measures to limit emissions would cost $4 trillion or so over the next 15 years, an increase of roughly 5 percent over the amount that would likely be spent anyway on new power plants, transit systems and other infrastructure.

When the secondary benefits of greener policies — like lower fuel costs, fewer premature deaths from air pollution and reduced medical bills — are taken into account, the changes might wind up saving money, according to the findings of the group, the Global Commission on the Economy and Climate.

We know approximately where most of the CO2 in the atmosphere comes from—developed and more advanced developing nations. But beyond that, things have been less certain. Now, though, NASA, NOAA, and a collection of universities have developed a map using satellite data that more precisely pinpoints where emissions originate. 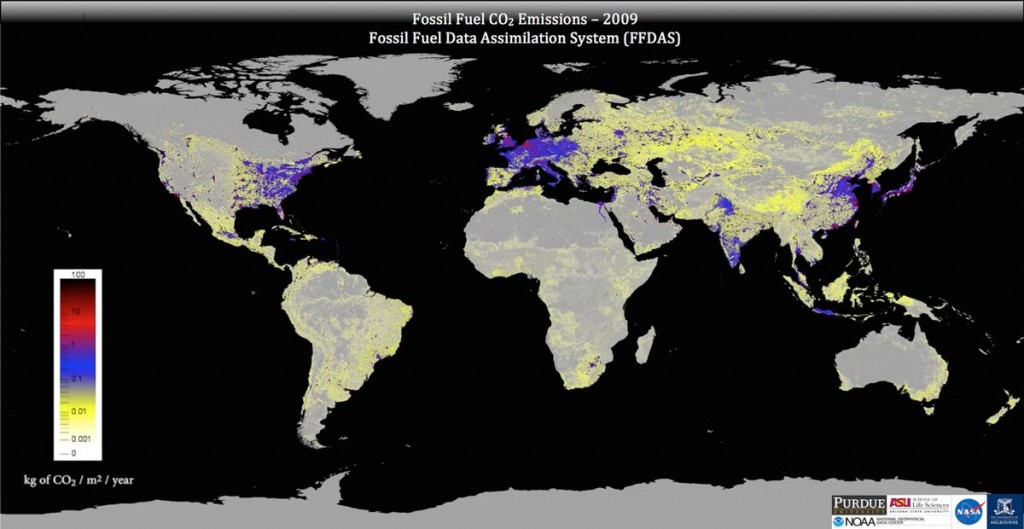 “The whole idea of an agrarian calendar makes it sound like it was an unthinking decision but the current school year was really a conscious creation,” said Gold, who is the author of “School’s In: The History of Summer Education in American Public Schools.”

Urban schools had a very different school schedule, but also included summer. School was essentially open year round, but was not mandatory, and children came when they could. In 1842, New York City schools were open 248 days a year, dramatically more than the 180 or so that they are open today.

In the days before air conditioning, schools and entire cities could be sweltering places during the hot summer months. Wealthy and eventually middle-class urbanites also usually made plans to flee the city’s heat, making those months the logical time in cities to suspend school.