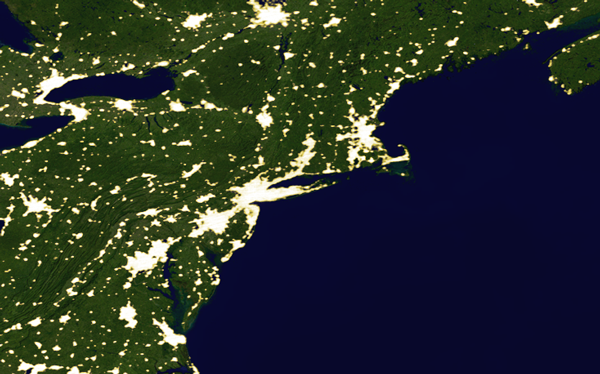 Twenty some years ago when I was leafing through my fourth grade social studies textbook, I became absolutely captivated by the idea of a megalopolis. “BosWash” was the one that really stuck in my head. The idea of one continuous city stretching from Boston to Washington, D.C. seemed unfathomable. Hell, downtown Milwaukee seemed big to me. But one city, stretching for hundreds of miles. It’s the sort of big thinking that grabs a nine year old and doesn’t let go.

Well it’s been twenty years, and I haven’t heard much about megalopolises in that time. If these agglomerations were really going to be the way many of us were to live, why haven’t we heard more about them? “BosWash” and “SanSac” have failed to enter the vernacular, though the Northeast or Northern California have continued to grow. So what happened to megalopolises? My hunch? They never went away—they merely became reality. Plain, boring reality.

BosWash and other megalopolises do not look like what a fourth grader would imagine a continuous city to be. They’re not a line of skyscrapers hundreds of miles long, or even a stream of townhouses and four-story office buildings. Instead, they’re just cities and suburbs stretching farther than the eye can see. My disappointment upon discovering the reality of megalopolises is not unlike to my reaction at learning the Pacific garbage gyre was not, in fact, an dense, walkable island of plastic the size of Texas.

Megalopolises and the Pacific garbage gyre have a lot more in common than just my own disillusionment. Both are larger than life, stirring our sense of awe (even if that awe is for how wantonly wasteful we are). Their realities are the sort that could never live up to our imaginations. Both are continuous, but also no where near as dense as we (or I) had imagined. BosWash is still five distinct major cities lodged in a matrix of smaller cities and suburbs. It sure feels continuous traveling between them, but it’s not all asphalt jungle between Boston and D.C.

Though megalopolises have slowly become reality, the word and the concept have been around for while. The original Megalopolis was an ancient Greek city smack in the middle of the Peloponnesian peninsula. It was a large city for the time (the Wikipedia article on the place mentions, not once but twice, that it had a theater that sat 20,000). Use of the term, especially as it pertains to large modern cities, didn’t become widespread until the early 1800s. The Oxford English Dictionary cites Webster’s American Dictionary as the first source of the word in 1828, meaning it had probably been a part of the lexicon for a number of years (aside: reading one dictionary cite another was a very “meta” experience). In 1927, Sir Patrick Geddes, a sociologist and city planner, whipped the term into its most current definition—a “city overgrown”—and London’s Daily Telegraph appropriately applied the epithet to Los Angeles forty-two years later.

In the intervening years, geographer Jean Gottmann intensively studied the United States’ Northeast megalopolis, helping cement the idea of a region-wide city in our social psyche. Futurist Hermann Kahn would name the region BosWash in 1967, a mere ten years before my social studies textbook was most likely published. Unfortunately for Kahn, the name didn’t stick, probably because it sounds kind of silly. Moreover, it fails to capture how the region has grown. Fingers of BosWash have extended north into Maine and south into southern Virginia, according to a 2005 Virginia Tech study (pdf).¹

Back in the 1960s, the notion of cities hundreds of miles long seemed so fanciful and future-friendly that it resonated with the zeitgeist. But as I think about the term today, it seems a lot less romantic. Yes, I’m not in fourth grade any more, and no, Boston, New York, and Washington have not slipped into decay. But what joins them is not a massive, continuous city, but a string of suburbs that just sort of popped into existence, suffocating the small towns in between. The anchor cities themselves still retain their particular character, which probably made fabricated name like BosWash feel, well, fabricated. The future will almost certainly bring many more megalopolises, but I’m guessing it will take a while before people cotton to the idea of being part of one giant city rather than a locality within a booming region. Until they do, the term “megalopolis” will probably remain relegated to academia and fourth grade text books.