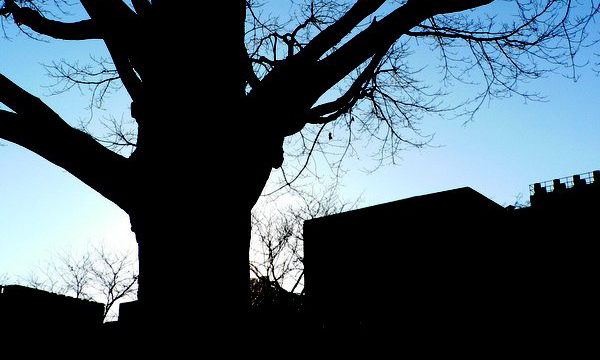 Cities aren’t called “concrete jungles” for their leafy greenness. But perhaps it’s an inappropriate nickname. Several cities actually have more—not less—tree cover than what came before them. By way of example, take this from historian William Cronon: “There are more trees in southern Wisconsin now than at any point in the last 7,000 years.” That’s in part due to more than a century of fire suppression, but also the intense pace of urban development.

There’s ample scientific evidence to back up Cronon’s assertion. In the early 1990s, David Nowak, an urban forester with the U.S. Forest Service, found that tree cover in Oakland, California, between 1850 and 1989 rose sharply from 2 percent to 19 percent. Now, a new study by Adam Berland, a PhD student at the University of Minnesota, found a similar pattern in and around Minneapolis, Minnesota.

Oakland and Minneapolis—and many other metro areas, I suspect—were sparsely forested before urban development. As far back as 1500 BCE, what would become Oakland was regularly burned by the Coastanoan Indians to clear out the underbrush to simplify acorn gathering. What trees remained in the 1700s were logged for lumber and firewood by the missions. Then in 1848, what was left nearly vanished when gold was discovered in California. By the time Oakland incorporated in 1852, its namesake was nearly gone.

Fire likewise held forests in southern Minnesota at bay for thousands of years. Yet unlike in central California, a part of central Minnesota quickly afforested during a brief climate cooling 400 years ago. It wasn’t long lived, though—shortly after their arrival, European settlers swiftly knocked down most of the Big Woods for farming. The remaining flecks large enough to be called forests cover only 2 percent of the original area. In other words, forests near Oakland and Minneapolis had nowhere to go but up.

The arrival of dense settlement was something of a godsend for trees. Young neighborhoods and cities are often depauperate—it’s easier to build without big trees in your way—but they tend to accumulate tree cover as they age. And relative to the denuded landscape that came before Oakland and Minneapolis, those urban forests are more akin to a real jungle than a concrete one.

Urban forests are certainly an improvement from a tree’s perspective, but they’re not a panacea for habitat loss. Neither of these studies examined how those forests function ecologically. Just like 11 random people do not make a soccer team, a bunch of trees is not the ecological equivalent of a real forest. Not only is the understory substantially different in cities—houses are terrible forage for most insects and animals—but the types of trees are often radically different.

Still, these two studies should make abundantly clear that cities do function as ecosystems, albeit limited ones. And in some cases, they are more diverse and productive than what came before. This is especially true for metropolitan Minneapolis, where monocultures of wheat and corn were less diverse than the Big Woods they replaced and maybe less ecologically complex than the cities that replaced them. These two cases also underline the need for an urban ecology that doesn’t just study what systems cities create, but strives to shape those systems for greater ecological complexity and diversity.