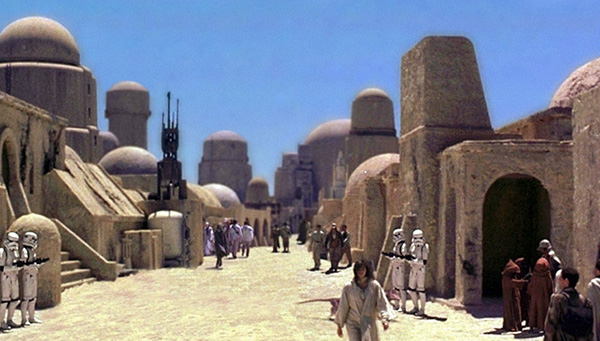 George Lucas hates cities. At least that’s what I gather from decades of watching and rewatching the original Star Wars movies.

The Star Wars movies are famous for hewing to archetypal stories—hero sets out to save galaxy from evil warlords, hero confronts his (familial) past, hero grapples with his role as a savior. And the movies’ portrayal of urban agglomerations is similarly archetypal, drawing on a long tradition of damning the city while praising the countryside.

Let’s start from the beginning. When we meet our hero, Luke Skywalker, he’s lamenting how isolated life is on his aunt and uncle’s moisture farm on Tatooine. But it’s that same upbringing—away from the corrupting influence of a big city—that frames his character. Luke may be brooding and somewhat annoying on the surface, but deep down we understand him as innocent and inherently good.

A few scenes later, that isolation is shattered. His aunt and uncle are ruthlessly slaughtered by Imperial storm troopers—interlopers from the city—searching for R2-D2 and C-3PO. With few other options available, he joins Obi-Wan Kenobi, a philosophical hermit living out his days in the wilderness, on a journey to find Princess Leia. That journey starts in Mos Eisley, what Obi-Wan calls a “wretched hive of scum and villainy.” The characters in Mos Eisley live up to that description, providing a stark contrast to Luke and Obi-Wan. The cantina patrons are rude, incendiary, and violent. It’s quickly apparent that Mos Eisley has no redeeming qualities. The best thing to do in Mos Eisley is to leave—which with the help of Han Solo, they do.

The problem is, the next place they end up is even more treacherous. They drop out of hyperspace where they had expected to find Leia’s home planet of Alderaan, but instead are captured by the Death Star. The moon-sized space station is the city at its most extreme. The Death Star is not just a moon-sized spaceship with a city covering its surface—the whole thing is a city, straight through to the power station at its core. And until it’s destroyed at the end of A New Hope, it is the embodiment of the evil Empire.

But Lucas’s critique of the city doesn’t stop there. Darth Vader’s flagship, the Super Star Destroyer Executor, paints a silhouette that resembles a city skyline. Cloud City on Bespin—where our protagonists hope to find refuge—is anything but safe. Mayor Lando Calrissian betrays Han and his companions, turning them over to Vader. Granted, Lando later struggles to undo his betrayal by helping Luke, Leia, and Chewbacca escape, but it’s too little, too late. In the bowels of Cloud City, Han is frozen in carbonite and handed over to Boba Fett while Luke battles Vader, losing a hand in the process and discovering the grim truth about his father. Cloud City is like Mos Eisley—you can’t leave soon enough.

Contrast Mos Eisley, the Death Star, and Cloud City with the Rebel strongholds. The Rebel base on Yavin Four is an ancient temple nearly overrun by a jungle teeming and screeching with life. And the Rebel Alliance’s headquarters in The Empire Strikes Back are dug into the snowy surface of Hoth, a wasteland even more desolate than Tatooine.

Luke and Obi-Wan aren’t the only protagonists closely associated with the wilderness, either. We meet Yoda in the swamps of Dagoba. The little green fellow is seemingly the only sentient being on the entire planet. It’s also there on Dagoba that Luke trains to become a Jedi and where Obi-Wan shares with Luke his last bits of wisdom.

The entire trilogy comes to a climactic finish on and above the forest moon of Endor. The moon itself isn’t necessarily representative of anything, but its inhabitants are. Ewoks are introduced as primitive and superstitious, but they quickly become our heroes’ key allies. It seems improbable that their help was what sealed the deal, but really the Imperials were doomed from the start. Their base and shield generator stood out like sore thumbs in the forest. The Ewoks and their villages, on the other hand, blended right in. The Ewoks also used their superior knowledge of the forest to turn the tide of battle in their favor. Finally, Return of the Jedi ends with our heroes celebrating their victory in a tiny Ewok village, not on a massive battleship or in a city.

But what about Coruscant¹? you might be thinking. Its residents cheered when the Empire was defeated in Return of the Jedi. That would seem to imply that Coruscant had some redeeming quality, that not all cities in Star Wars are evil. Technically, Coruscant wasn’t in the original trilogy prior to Lucas’s tinkering, and my analysis here has been limited to the original, unadulterated trilogy. But Coruscant is hard to ignore for two reasons: One, it’s a world that’s almost entirely urbanized, and two, even if it wasn’t portrayed in the original trilogy, it plays an undeniably central role in Star Wars mythology.

Coruscant’s portrayal is more complicated than other cities in the Star Wars universe. That’s in part because it wasn’t included in the original trilogy. Lucas’s vision for the first three movies was unsubtle—there’s good and there’s evil and there’s very little overlap between the two. Even the central characters that are the most conflicted—Han and Lando—end up so unambiguously good that they spearhead the two-pronged attack on the second Death Star. Coruscant doesn’t carry the same dichotomous baggage. Its later introduction means it’s wreathed in subtleties that are missing in the original movies. But ultimately, it’s still depicted as a bad place.

Long before we meet Luke, Coruscant was the seat of the Old Republic. For thousands of years, it was a force for good in the universe. It hosted the Imperial Senate. The Jedi Order was headquartered there, too. But over time, the Old Republic rotted like a tree—from the inside out—implying that the capital was at the center of that decay. Indeed, Palpatine plotted his takeover from a penthouse office on Coruscant and later made the planet-city capital of his Empire. On balance, Coruscant is more evil than good.

George Lucas isn’t the only one who has juxtaposed virtuous rural folk with vile city dwellers. People have been doing that for centuries. In the late 1700s and early 1800s, the Romantic and Transcendentalist movements were intellectual reactions to the ascendancy of cities. For example, Ralph Waldo Emerson saw cities impersonal and anonymizing, their inhabitants despondent and listless. Romantics like Percy Bysshe Shelly often brooded over ancient ruins, remarking on how such constructs of society were often overwhelmed by nature, implying a sort of justice for the wrongs cities exact on humanity. Both groups built their reputations by extolling the virtues of the countryside while decrying the debasing influence of cities.

Star Wars is just another footnote in a bulging tome of intellectual criticism on cities. It may seem surprising that such commentary would come in the form of a sci-fi film littered with energy weapons and faster-than-light travel. But if you pause to consider George Lucas himself, it shouldn’t be. Just look at where he lives—on 4,700 acres of rolling oak woodlands, secluded from the chaos of the San Francisco Bay Area.

Thanks to Maura Chhun for her invaluable feedback.