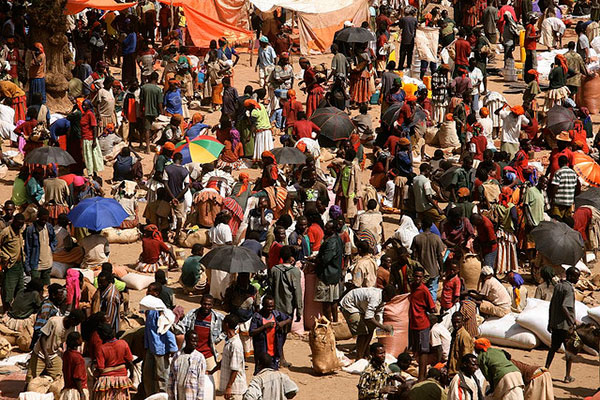 I’ve heard the statistics so often they’re almost cliché: Fifty percent of the world’s population now lives in cities, and by 2050 it will be 70 percent. Yet those numbers fail to capture the enormity of the change, especially so for those of us in the developed world where for decades the majority of the population has lived in cities.

Such a demographic shift is occurring today in China, but the situation there is different than in Africa. China’s semi-command economy and authoritarian government make managing mass migrations easier. Furthermore, the Asian nation is two times bigger than Africa’s two largest nations—Algeria and the Democratic Republic of the Congo—combined. Planning on that scale has its advantages.

China’s and Africa’s circumstances aren’t entirely dissimilar, though. China’s expanding cities have displaced farmers on the periphery, leading to protests. Social strife in African nations is similarly problematic. Take the example of Bahir Dar, Ethiopia. Researchers from Tattori University in Japan and Mekelle University in Ethiopia mapped the city’s expansion from 1957 to 2009 and found that Bahir Dar’s area expanded 31 percent annually, or 88 hectares (217 acres) per year. That’s a shockingly rapid pace, even outpacing some of China’s cities.

It also portends social strife. The researchers interviewed 271 of the nearly 2,900 households whose farms had been seized between 2004 and 2009 to make way urban development. What they heard paints a gloomy picture. First the good news: Nearly all were offered and received monetary compensation. Now the bad: Nearly all of those who had received compensation said it wasn’t nearly enough to replace what they had lost. One farmer’s response explained the shortfall in a nutshell: “I had 300 eucalyptus trees, 45 coffee trees, ten mangos and avocados, and ten papayas on my land, but finally I received compensation only for the farmland.”

Even if monetary compensation were sufficient, it wouldn’t be what expropriated farmers need to transition to urban life. Nearly 60 percent of the surveyed households let their money sit in the bank—they hadn’t a clue what to do with it. “It would have been better to change the money into other assets. But to do this, I do not have experience and knowledge since I am illiterate,” one respondent said. A few were given other opportunities—40 percent were offered a line of credit and 24 percent were offered some sort of training. But those promises were often reneged.

The loss of farms isn’t just a tragedy for the affected families—residents of Bahir Dar will feel the effects, too. Though African cities are entering global food markets, many people still rely on outlying farms. And as cities expand, many of those farms disappear. That means crops have to be trucked greater distances, increasing food prices and further sensitizing them to rising oil prices. People in developing nations already pay a greater proportion of their income on food than those of us in developed nations. Any increases in food prices can be calamitous, as we saw in 2007 and 2008.

It doesn’t look like there is relief in sight, either. In Bahir Dar’s case, the researchers predict the city will double in extent by 2024. Similar patterns are likely to be seen across Africa as many cities will double in population by that date. As in developed countries, part of the solution will be better education and training for the displaced and newly immigrated. But given the projected magnitude of urban growth in Africa, even that may not be enough.

Salvaging disturbed forests may not save biodiversity