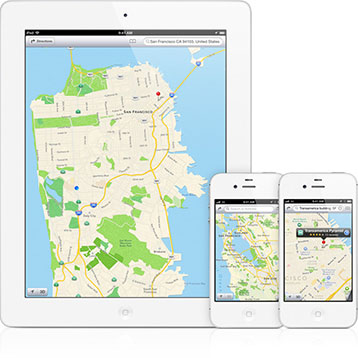 Apple announced today that it’s revamping the Maps application on iOS devices—iPhone, iPad, iPod touch—introducing a lot of showy new features like turn-by-turn directions and 3D flyovers. While those make for sexy commercials, they won’t be as impactful as the switch from raster- to vector-based map data. If you’re not sure why you should be excited about the change—and you should be—read on.

Web mapping has revolutionized cartography, but from a data perspective, it’s still stuck in the past. Google Maps, MapQuest, and others deliver map data as images. From a computer’s perspective, they’re just like photos snapped by digital cameras. They’re a series of pixels that combine to form an image. That means they’re well suited for web browsers, which are adept at displaying image files.

But that same strength is also a weakness. Image files can have either small file sizes or high levels of detail, not both. To compensate, web mapping applications load a series of tiles based on the extents of your view and how closely you’re zoomed in. Drag the map or zoom further, and they load more tiles to show more of the map or provide more detail. That trade-off has worked well in a broadband world, but it begins to show some cracks on mobile devices, which have more limited bandwidth.

Enter vector-based maps. They’re nothing new—geographic information systems have been storing and displaying vector data for decades—but their application in consumer mapping systems is. Vector data is stored as a series of lines and points instead of pixels. That means the only data stored is the data that matters. A vector street map, for example, will have data only on the streets’ paths, resulting in a smaller file. A raster map of the same also would have data representing the blocks in between the streets, even if they are empty, creating a larger file.

Another benefit of vector data is that it is just as precise at the widest zoom as it is at the closest. That eliminates the need for loading more tiles as you zoom in or out. It also means the entire data set—all scales, all extents—can be lighter-weight than a comparably detailed raster data set. That means map data can be sent more quickly to your iPhone. And it’ll look better—no more jagged boundaries if you happen to slip in between the zoom levels predefined by Google.

Vector-based maps aren’t a panacea, though. They’re simply not an option when it comes to displaying satellite photos—raster data is the only real choice for that. Plus, vector maps tend to require more processing power to display than raster maps. As a result, vector maps weren’t feasible on mobile devices until recently.

Those hurdles have disappeared in the past few years, at least for apps running on mobile devices. Google rolled out a vector-based maps app for Android in December 2010, and now that Apple has joined the party, it’s clear vector maps are here to stay. That doesn’t mean raster maps will disappear—satellite photos are still best viewed that way, and desktop and laptop users will be stuck with raster street maps for a while longer because of shortcomings of today’s web browsers. But mobile users—who have the most to gain at this point—will see immediate, though maybe not immediately apparent, benefits.