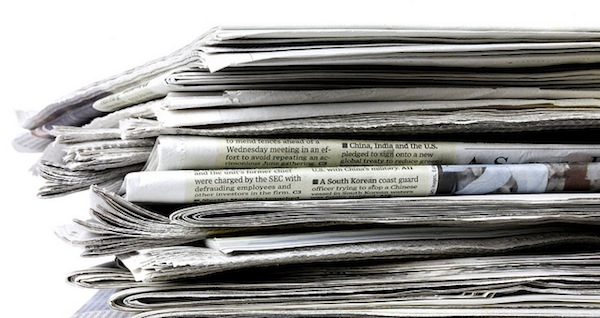 Newspapers are in a tight spot. Advertising revenues have been declining for 11 years straight, and classified ads have all but vanished in the face of Craigslist and eBay. The move online hasn’t been smooth for them, either. First, they gave away their product, hoping to make it up on volume with increased ad sales. That hasn’t exactly worked—for every $1 newspaper websites bring in, they have lost $25 in print advertising. The only bright spot is subscriptions, which have miraculously held steady. Many papers are trimming their publication schedules—the New Orleans Times-Picayune the most recently notable of them—leading many communities to fear the ultimate demise of important institutions.

Whenever a business or industry falls on hard times, people trip over themselves to propose turnaround plans. Newspapers are no exception, and I’ll be damned if I’m going to be left out of the fray.¹ My diagnosis? Too many newspapers have placed their bets on intensely local coverage, or hyperlocal as they call it in the biz. That’s a mistake. To remain profitable, they need to concentrate on a particular topic instead of a geographic region.

That epiphany occurred to me Christmas morning over a bowl of cereal at my in-laws. I was flipping through the Houston Chronicle when I noticed the paper had branded their energy coverage, FuelFix. Not the best name, but it’s a sound idea. Houston is a major hub for the oil and gas industry, and Chronicle reporters have spent years, even decades reporting on it. Who else would be so positioned to cover the industry?

The Chronicle isn’t the first paper to experiment with trade-specific coverage. The New York Times has done the same thing with financial firms and DealBook, to much success. By providing consistent, nearly obsessive coverage of an industry, both papers attract new readers and new advertisers interested in reaching a targeted audience.

Those two data points made me realize that most papers have it all wrong, at least as far as profitability is concerned. Hyperlocal coverage will never be profitable enough. On a local level, there’s simply not enough news worth paying for. Try too hard and you end up with stories like this. Subscribers will never fill the void—there simply aren’t enough people willing to pay for local news, especially when they can get the basics on TV, for free.² Hyperlocal won’t attract enough advertisers, either. The local advertising pie just isn’t that big.

This is where trade publication sections like FuelFix and DealBook come in. Revenues from their higher ad rates (and, yes, maybe even new subscribers) can subsidize the rest of the paper. It’s a new twist on an old model. In the past, classifieds and legal notices kept the rest of the paper afloat. Today, trade sections can serve the same role.

New York and Houston aren’t the only cities with papers that could benefit from a trade publication model. The Detroit Free Press already closely covers the auto industry, but it could do more. The Milwaukee Journal Sentinel could dig deep into manufacturing. The Chicago Tribune might look at commodities or financial firms outside of New York. The San Jose Mercury News and the San Francisco Chronicle could step up their tech coverage, too. There’s a lot of competition in that sector already, but it is highly profitable. And if that fails, there’s still a chance for them in biotech. Not all papers can follow this model, but having some survivors is better than none.

With profits from the trade side, newspapers could continue covering the less profitable—but arguably more important—stories. It makes business sense, too. Without the rest of the newspaper, the trade section loses some of its credibility. It would be just another trade publication.

This plan isn’t problem free. Like in the past, advertising-editorial conflicts could scuttle the whole experiment. But unlike other proposed new business models, that devil is well known. Newspapers have managed such conflicts by erecting firewalls between advertising and editorial sections. The same could be done with trade sections by separating the two newsrooms. Even better, papers could spin them off the trade sections into wholly-owned subsidiaries and let the profits flow back to the regular news side. It might be enough to let newspapers live to die another day.