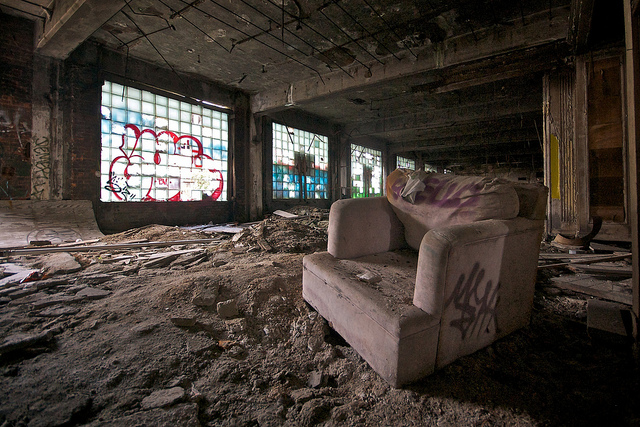 Forty years ago, Detroit was doing pretty well. The auto industry was cranking, employment was high, wages were decent, and the city was packed. Today, well, not so much.

Forty years ago, Pittsburgh was doing pretty well. The steel industry was cranking, employment was high, wages were decent, and the city was packed. Today, well, it’s actually not doing so bad.

Both Rust Belt cities have a lot in common. They were heavily working class, and when manufacturing started moving overseas and automation encroached on what was left, people lost their jobs. When manufacturing jobs didn’t return, they left. Since 1970, Detroit has lost more than 45 percent of its population, Pittsburgh more than 43 percent. So what makes the two different?

Education, in a word. Today, a greater proportion of Pittsburgh’s residents have college or higher degrees compared with Detroit. That comparison comes by way of Dan Hartley, a Cleveland Federal Reserve economist, who crunched some numbers for four hard-hit Rust Belt cities—Detroit, Pittsburgh, Buffalo, and Cleveland—and arrived at some not-surprising conclusions. Though most of his analysis focuses on Cleveland, it was the disparities between Detroit and Pittsburgh that caught my eye.

In 1970, before the Rust Belt grew rusty, both cities were at the tops of their games. Median household income in Motor City was $46,438,¹ not far off from today’s nationwide median of about $51,000. For a working class city, that’s not bad. Pittsburgh was in good shape, too, with a median income of $37,477. Home prices were similarly competitive. In economic terms, both Detroit and Pittsburgh were typical American cities.

But over time the two diverged. By 2006, the year in which Hartley’s analysis is based, median household incomes were down 35 percent in Detroit but only off 10 percent in Pittsburgh. Home prices mimic that on a lesser scale, with Detroit up 9 percent and Pittsburgh up 13 percent. Where they differ is in education. In 1970, 6 percent of Detroit’s population had a college or higher degree. In 2006, just over 11 percent did. Pittsburgh, on the other hand, more than tripled its share, going from 9 percent in 1970 to over 31 percent in 2006.

In that time, the Steel City invested heavily in wooing healthcare companies and was reasonably successful at it. But that shift would have stumbled if the city hadn’t already had a strong educational foundation. Both Carnegie Mellon and the University of Pittsburgh are located in the city, providing plenty of local college grads looking for employment. Detroit has Wayne State, which is not a bad school at all, but it can’t compare with two, high-reputation schools like Carnegie Mellon or the University of Pittsburgh, which together have 12,500 more students than Wayne State.

If you look closely and in the right places, you quickly notice that education is the cornerstone of many booming cities and regions. Silicon Valley wouldn’t be what it is today without UC Berkeley or Stanford, and the Boston area wouldn’t be a hub of robotics if it wasn’t for MIT. If you want a thriving city, focus on education. I won’t say everything else is just details, but smart people have a way of figuring those out.

Why I can’t move back to Wisconsin