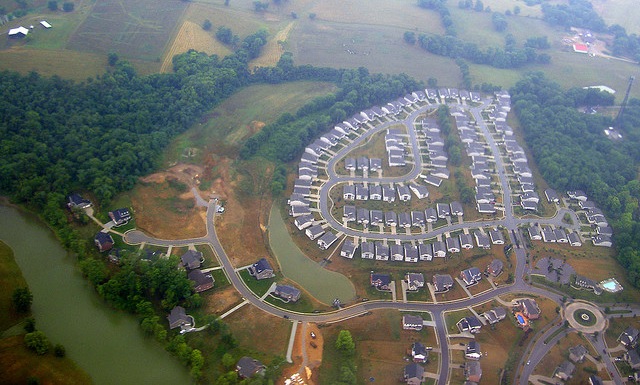 Travel just outside any large American city and one of the things you may notice is the number of new construction projects. Fresh, undeveloped land on the fringe of a metropolitan area is land ripe for the picking, every developers dream. The pace of suburban development, it would seem, has not slackened since it started in the 1950s. But things are not always what they seem. Though many major American cities are continuing to grow, each person they add is taking up less land than the person before them. From Houston to New York to Los Angeles, cities are consuming land at a slower rate than before.

The study that stumbled upon this nugget was originally looking for links between types of zoning laws and the amount of land consumed per additional person in a metropolitan area. They found that cities with ordinances that encouraged the redevelopment of old sites within city limits reduced their per capita land consumption by twice as much as cities with more traditional zoning laws. Overall, major metro areas in the U.S. added 1,184 square feet (110 square m) less land per person in 2000 than they had in 1990. Additionally, in cities that did slow their rate of per capita land consumption, more people settled in denser neighborhoods. The study shows that zoning laws do have an effect…sort of. It turns out that zoning laws are not entirely responsible for the change.

Part of the proof is the fact that four of the major Texas metropolitan areas grew and consumed less land per capita, too. If you’ve ever visited or flown over any of these cities—Houston, Dallas/Ft. Worth, Austin, San Antonio—you know they don’t keep a tight leash on development. I’ve visited or driven through each of them over the years, and I got the impression they were sitting atop massive suburban volcanoes, spewing strip mall magma and tract housing pyroclastics. Since Texas does not have many natural barriers to impede city growth, you’d think its cities would just keep growing. Except they haven’t.

The study’s authors don’t touch on possible reasons behind the Texas anomaly—there were too few metro areas that followed the zoning creed to make any statistical inferences—but I have hunch why their rate of per capita land consumption is dropping like a stone. Without trains to rapidly move people from place to place, the freeways and tollways have become saturated with traffic. Large, low-density cities simply take too long to traverse. People in Texas may be warming up to higher density living, but not after thousands of square miles have been gobbled up by Walmarts and Whataburgers.

The sprawling cities of the Southeast may want to take notice of what’s happening in Texas. Though many saw their per capita land consumption slow as well, their urban cores did not grow any denser, suggesting they may follow a very Texas-like trajectory. On the other side of the country, many Western cities, such as Phoenix, have already reached their saturation points and have begun to densify.

Still, not every city is building up instead of out. The Grand Forks, ND, metro area, for example, has been adding a whopping 1.3 acres (0.54 ha) per person, compared to the New York metro area, which has added only one tenth of an acre (0.05 ha) per person.

While inward-looking zoning laws have reduced the rate at which cities are expanding per person, they apparently have not had much of an impact on the proportion of people living in denser neighborhoods. What does seem to work are conservation programs. Funding for such initiatives seems to be a very strong indicator that a city is densifying. “Cities with any level of conservation funding are denser than cities with no conservation funding,” the authors report. Though they have no data to explain why this is, they do have a few reasonable guesses. It could be that the conservation money sets some land aside for parks. Or maybe people who live in cities that invest in conservation are willing to live in denser neighborhoods.

Overall, many of America’s cities are finally curbing their seemingly insatiable appetite for land, but many have a long way to go before they begin to look like New York or San Francisco. Most of the land within American cities is locked up in low density development, which houses a relatively small number of people. So long as the desire for such housing exists, cities will continue expand.