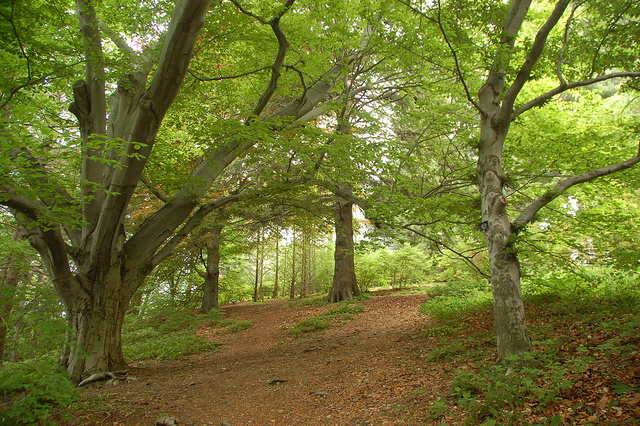 Half a block from my childhood home is a park where I spent countless hours. But it isn’t your ordinary city park. Within the confines of its unusually large 14 acres lie three distinct forests, each a snapshot of a period in time for America’s eastern hardwood forests. At the time, the smallest was a dense and brambly thicket. It reminded me of a field gone fallow, a farmer’s broken dream. The largest was a maze of young trees and even younger saplings, the sort that lines the backyards of new suburban homes. The one in between—the one that’s just right—was filled with colossal sugar maples and stately oaks. It wasn’t burdened with an impassable understory like the other two, letting me, my sister, and my friends roam freely beneath its towering canopy. It’s exactly what I imagined Wisconsin was like before going under the plow.

It turns out my romanticized vision of the the great American hardwood forests was not too far from the truth. Upon first observing the American landscape from the Potomac River, Andrew White, a Jesuit priest and one of the founders of Maryland, wrote that “Fine groves of trees did appear, not choked with briers or bushes and undergrowth, but growing at intervals as if planted by the hand of man, so that you can drive a four-horse carriage, wherever you choose, through the midst of the trees.”

Clearly, the forests of the eastern United States were nothing like the thickets I avoided during my youth, or the brambles that bound backyards and border highway road cuts. The reason for this is simple—pre-settlement forests were working landscapes, set afire at regular intervals to clear out the old underbrush.

Colonist Thomas Morton reported in 1637 that the American Indians “were accustomed to set fire to the Country in all places where they come…The reason that mooves them to doe so, is because it would other wise be so overgrowne with underweedes that it would be all a coppice wood, and the people would not be able in any wise to passe through the Country out of a beaten path.”

Movement was but one reason American Indians set fire to the forests; perhaps more importantly, fire sweetened forage for game animals like deer and was a powerful tool to clear land for agriculture. They lit fires every seven to ten years to clear out the old underbrush for better hunting and larger fires every 15 to 30 years for planting. The higher frequency fires were low intensity, allowing mature saplings to survive, while the larger fires consumed every tree, leaving the land open for planting. After a while, farming sapped the fertility from the large openings. Villages would then move on to clear new fields, leaving the old ones to be reforested. As a result, the early American landscape was a patchwork of forest and plain, new growth and old.

European settlers initially used fire as well, but merely as a tool to clear the land for agriculture. As the nation’s population increased over the years, using fire fell out of favor. Eventually, fire was exiled from the American forest.

The resulting absence of fire has sharply increased tree densities in the remaining forests. Without fire to clear out a few generations of young seedlings and saplings, more trees survive to adulthood, clogging the landscape. One study in Michigan’s Upper Peninsula reports that tree densities have doubled, if not tripled, since the mid-1800s. At the same time, the size of the individual trees has declined. Younger trees have sprung up unchecked, creating the sometimes messy looking forests you see today.

That’s not to say these denser, thicker forests are bad with a capital B. It all comes down to the type of landscape in which we wish to live. The parklike landscapes of early America caught the eye of many a colonist, and probably not just because it reminded them of the old country. Some research suggests that humans may have an innate affinity for open woodlands that harbor clear sight lines. And there are many ecological benefits to creating a wooded landscape varied in both density and age. Without fire, clearing out underbrush to recreate the forests of yore is a difficult task. But if you’re a landowner interested in curating a slice of history, perhaps it’s one worth considering. Just consult your local ecologist before firing up the chainsaw.