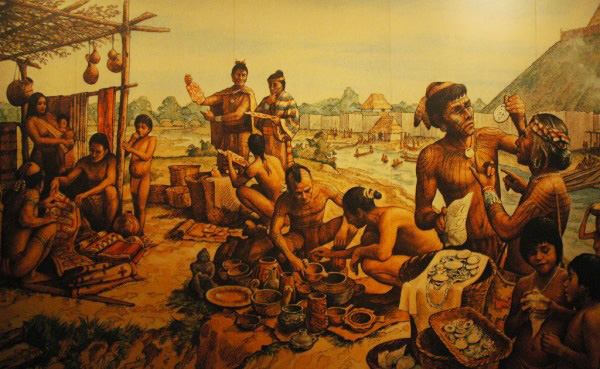 Cahokia is one of the largest historical American cities you’ve probably never heard of. Peaking around 1250 CE, Cahokia is considered the first Mississipian settlement, a culture which spread to throughout the central and southeastern United States. The city’s inhabitants built over 100 mounds, eighty of which remain. One of them still towers 92 feet over the surrounding fields and is easily visible from the scratched postage-stamp windows of St. Louis’ Gateway Arch. With somewhere between 10,000 to 15,000 people, it held the record for the largest American city until around 1800, when Philadelphia finally overtook it.

With that many people crammed into just under three-quarters of a square mile—the estimated size of the city’s neighborhoods—it may sound like Cahokia was as cramped as the slums of Upton Sinclair’s Chicago. But it probably didn’t feel that way. Sweeping plazas and towering mounds added nearly three square miles of open space, keeping much of the city open and airy like Baron Haussmann’s Paris. Yet unlike the city on the Seine’s astronomical modern density of 58,890 people per square mile, Cahokia’s population lived at a positively suburban 1,000 to 1,500 people per square mile, thanks to the plazas and mounds.

Archaeological excavations in the area suggest that Cahokia proper can be bounded by one circle two miles in diameter and another about 1,200 yards in diameter. Of that space, less than 20 percent was devoted to housing, which was clustered in small groups. The rest of the area was tied up in grand plazas and towering earth mounds. So while the density was higher in the housing clusters—about 5,600 to 8,500 people per square mile—open space was never far away. Cahokia may have been bustling for the time, but it was probably a pleasant place to live.

Flipping through the pages of a book chapter on Cahokia’s population, I was struck by the way archaeologists used population density not as a final product, but a building block. By excavating only small areas—sampling the landscape, in effect—they estimate both the number of people that occupied a certain area (based on the size and number of houses) and the extent of housing within the settlement. They then multiply the two together and get a reliable estimate of its population. Modern population density is derived the other way around, built from census data and community extents.