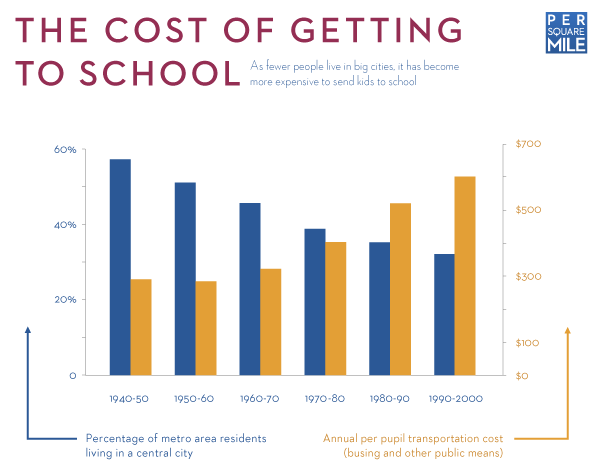 Chalk it up to the law of unintended consequences. As Americans have flocked to the suburbs for the lower cost of living, the cost of sending their kids to school has gone up. Where most kids used to walk to school—myself included—nowadays many simply live too far away. While some students get rides from their parents, many are left to take the bus, an option that is funded by districts. But as kids travel farther to get to school, the costs for busing them have also gone up.

Fully 56 percent of people living in metropolitan areas in 1950 resided in their region’s big city (or cities). By 2000, that proportion had dropped to 32 percent. At the same time, the cost of sending kids to school has increased from $289 per student to $737 per student.¹ It might be tempting to blame gas and diesel prices, but they aren’t responsible—they’ve remained largely constant over that time period when adjusted for inflation (except for the energy crisis in the 1970s). Yet the trend in student transportation costs has risen unabated. Though the outlay may not seem significant, it is money that would be spent more effectively in the classroom.