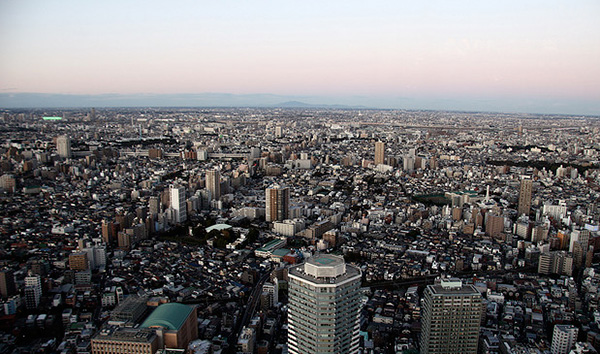 Science fiction is littered with planet-wide cities. Star Wars had Coruscant, Isaac Asimov’s Foundation Series had Trantor, and even Star Trek, in an alternate timeline in First Contact, saw Earth paved over by the cybernetic Borg. City-planets are both a wonder and a terror—we stand in awe of our power to change the world, but also regard that ability with fear. What if we actually did it? Hundreds of years ago, it didn’t even seem possible. But the quickening pace of population growth in the 1800s changed that, and the vast environmental changes sweeping the planet today are a stern reminder of just how powerful we are.

Of course, Earth is not in any immediate danger of becoming one conurbation, but the trend isn’t promising. Urban areas around the world are expanding at double the rate of their populations. That means every person who moves to or is born in a city will, on average, take up more space than the person before them.

And soon there will be a lot more people wanting that extra space. Urban populations are expected to swell to 5 billion in the next two decades, and according to a recent study published in the Proceedings of the National Academy of Science, cities are expected to gobble up another 460,000-plus square miles (1.2 million square kilometers). Put simply, it means that cities will occupy three times more land in 2030 than they did in 2000.

That’s a staggering amount. The results are equally astounding. The east coast of China is likely to merge into one massive city. Cities in the region spanning Lake Victoria’s north shore—an arc from Burundi to Kenya—will swell 1,900 percent in area. Urban areas along the coastal strip from Côte d’Ivoire to Nigeria will grow 920 percent. Other countries like India, Mexico, and Turkey will also experience outsize urban growth. Even developed regions like North America and Japan will have to endure massive urban expansion.

There’s a lot to be concerned about with these statistics. Urban areas that grow several-fold in a few decades won’t be happy places to live—they’ll likely be dominated by slums, or at the very least snarled with traffic and choked with pollution. The situation is even more dire for the ecosystems they’ll be displacing, which are some of the most diverse in the world. That’s because we humans prefer to live in dangerous places, places dominated by disturbances like earthquakes, volcanoes, tsunamis, and floods, processes that produce rich and diverse ecosystems. As a result, the next two decades of urban expansion will imperil nearly 140 amphibian species, more than 40 mammal species, and 25 bird species.

That doesn’t mean we should halt progress and send everyone back to the farm. Cities are still more environmentally friendly on a global scale than the alternative. No, what it means is that we need to think hard—and fast—about how we’re going to cope with the booming urban areas of the next two decades. Much of that growth is going to happen in places like Africa that haven’t had large cities historically. Nigeria, for example, is projected to have more than 400 million people in 2050. That’s more that double its present population.

Success will depend on thinking big. It’ll require “more holistic policies that integrate traditional urban sectors—transport, energy, sanitation, buildings—with land use and conservation,” the study’s authors write. A “science of the city” that others have been arguing for. Developing that science is, in my mind, the only hope we have of taming these urban beasts. The cities of the future may not be the planet-consuming behemoths of our techno-futuristic tall tales, but they’ll be beyond anything we’ve ever seen before. We’ll need a science that’s equally formidable.

Why we live in dangerous places