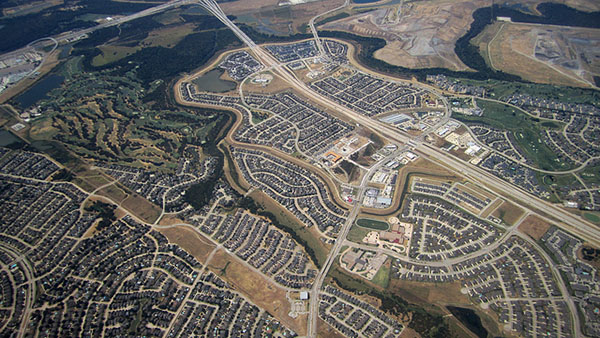 If you think American cities are sprawling now, just wait until 2025. In that time, the U.S. population will grow by 18 percent but the amount of developed land will increase 57 percent. Up to 9.2 percent of the lower 48 could be urbanized by then. And while that number includes cities and the infrastructure to support them—roads, rail, power lines, and so on—that number does not include land impacted by farming, logging, mining, or mineral extraction.

That 10 percent of the lower 48 could be crawling with people is a stark reminder that our nation—while immense—is not immune to the pressures of development. It’s also acknowledgement that despite years of hearing about the resurgence of American cities, sprawl is still king.

Today, it feels like much of what drove the suburbanization of America since World War II has changed. Incomes aren’t rising nearly as fast as they did in the 1950s and 1960s. In fact, when adjusted for inflation, incomes have stagnated or dropped in recent decades. Soaring gas prices and congested freeways have stolen some of the automobile’s glamor, too.

Yet two studies show that while the outlook in the U.S. may have changed, our desire for suburban living has not. The study’s results differ slightly—the 2004 paper says we’ll add 25.8 million hectares (64 million acres) by 2025, the 2009 manuscript says 22.4 million hectares (55 million acres) by 2030—but their conclusions are the same. American cities will continue to sprawl, adding more land per person than in the past.

In recent decades, the locus of suburbanization has shifted from the Northeast and Midwest to the South. With its warmer weather and lower costs of living, the South has grown faster than any other region in the U.S. since 1980. Development has been fueled by flat, cheap land and abundant freeways, which has pushed land demands well above the national average in some states.

That boom also meant the South was hit hard by the housing bust in 2008. But that doesn’t mean the market for suburban housing has disappeared. Living the burbs is still cheaper than the city, and since real incomes for most Americans have suffered in recent years, development will continue to chase lower land prices. The recession and housing slump may have put a damper on suburban development, but I’m guessing it’s just a temporary blip.

Another factor that should conspire against suburban development—higher gas prices—also doesn’t seem to have much of an influence. The 2009 study suggests development rates won’t take much of a hit from high fuel costs. To simulate rising gas prices, the study’s authors reduced the forecasted development rate in states where it was highest—primarily the car-centric South. Only 5 percent less land was converted from rural to urban uses.

It’s possible things could change—perhaps fuel costs will rise even higher, or maybe the home downsizing trend that’s in its infancy will mature. But I think we should prepare for a future filled with suburbs. In the South, where most of the development is happening, land continues to be cheap and easy to access. The same warm weather that drew many people there will also keep them in their cars. Nobody likes walking in the South’s sweltering summers, even if it’s just from the steamy parking lot to the over-air conditioned mall.

The question then is, how can we make the suburbs more environmentally friendly? Encouraging compactness would be a good start, even just at the subdivision level. Hopscotch development inflicts ecological damage well beyond its immediate footprint—there are many plants and animals that cannot survive surrounded by a sea of humanity. Dispersing job and commercial centers is another option, helping to reduce the number of miles people have to drive on a day-to-day basis.

In the end, though, we’ll have to push for more ecologically integrated development. We’ve seen small steps in that direction already—most new subdivisions must deal with run-off from rainstorms on-site rather than shunting it to an overburdened creek. It’s a start, but not enough to offset America’s suburban future.