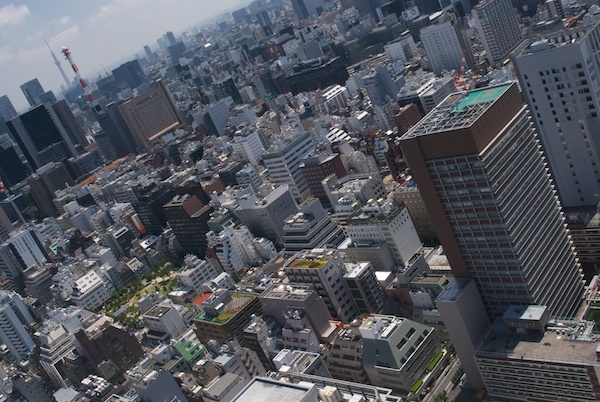 Cities, it seemed, had been abandoned by science. When all the other disciplines and systems were being quantified and theorized, cities were largely ignored. Cities didn’t have a grand unified theory or a theory of everything. Hell, for the most part they didn’t even have a theory of something. People pieced together bits and bobs here and there, but there was no wide-scale model to describe what is the greatest collection of systems ever devised by humanity.

That may be changing, though. Luis Bettencourt, whose work I’ve written about before, published a new paper today in which he claims to have developed a unified theory of the city. Like his previous research, it focuses on scaling in cities—what patterns and processes share mathematical similarities across cities of all sizes. Bettencourt takes a functional approach, studying what he believes are cities’ reasons for being, social interaction.

Bettencourt believes there are four sparks that cause cities to form—the mixing of populations, the incremental growth of networks, the bounds of human effort, and the relationship between socioeconomic output and personal interaction. According to these assumptions, cities are founded and grow primarily so that people can interact frequently and on a personal level. As demand for face time swells, cities expand, incrementally adding to the existing network. Eventually, those networks reach a limit, bounded by the amount of effort we are willing to expend to expand and maintain them. The greater the benefit of living in a city, the more effort we’re willing to expend to sustain it. Bettencourt’s final assumption may be his most astute—that cities aren’t just agglomerations of people, but also concentrations of social interactions.

The formulas Bettencourt derived could prove powerful. His most muscular equation, that which models city growth, identifies cities that punch above and below their weights. Others show how substandard transportation can hold a city back, or how transportation networks tend to grow incrementally (perhaps that’s why automobile sprawl seems so intractable). But his formulas also highlight some perils, like how energy loss in transportation increases superlinearly—the more you move, the more energy it takes to move something. In sum, they appear to build a solid theoretical framework by which further questions can be asked and hopefully answered.

Those of us who have been arguing for a science of cities¹ will find promise in Bettencourt’s work. It’s a strong first step, though I hesitate to declare victory and go home. It’s a theory based in data, but it’s still just a theory. Until it and other models are devised and tested experimentally, we won’t have a true, robust science of cities.

So what took us so long to get to this point? Why is it only now that we’re developing a true theory of the city? I have a couple theories. First, when many disciplines were delving into the world of theory—the 1940s through the 1970s—cities were thought to be relics of the past. Our newfound mobility had enabled us to leave the polluted, crime-ridden warrens behind, so why would we want to spend our time thinking about soon-to-be-obsolete cities? Only recently have we reevaluated urban areas, holding them in higher esteem than just a few decades ago. The other possibility is that cities are intensely complex, and that complexity is further complicated by the fact that we created it. Any time humanity is involved, the level of anxiety and detail ratchets up immensely. With cities and other human-based systems, it can be tricky to separate ourselves from the equations.

The current science of cities seems at about the state ecology was during the late 1960s and early 1970s. Then, overarching theories were new to the field, as they are now with cities. But because we’re already collecting so much data on cities—much more than is collected on the natural environment, I’d warrant—I expect urban science to evolve more rapidly. The gap will close, and perhaps someday the science of cities² will teach ecology a lesson or two.

We all want to live in small towns, and it’s killing cities