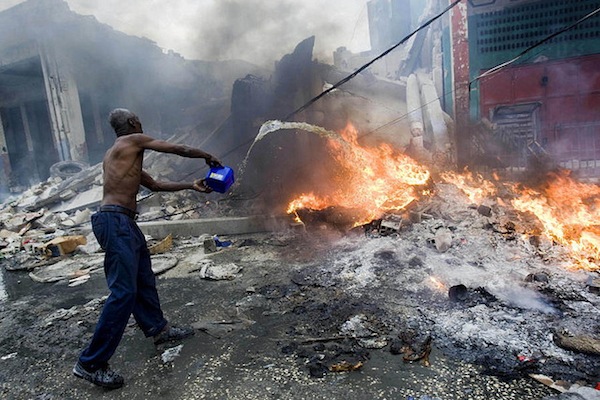 It was the evening of January 12, 2010, and Kathleen Tobin had just landed in Chicago’s O’Hare International Airport having come from Port-au-Prince, Haiti. Tobin is a historian at Purdue University Calumet in Hammond, Indiana, and she had been visiting Haiti for research. Shortly after getting off the plane, she heard that a massive 7.0 earthquake had struck only 16 miles west of Port-au-Prince, where she had been mere hours before.

The earthquake had leveled large portions of the city. The Haitian government estimates 100,000 houses were destroyed and another 200,000 were damaged. Some were informal housing units—commonly known as slums—but some were also legal dwellings. Regardless of their legal status, most of the buildings that collapsed in the earthquake were poorly built using brick and concrete with little to no steel reinforcement, the sorts of structures that are death traps when the ground starts shaking.

Tobin, shaken by the ordeal, set out to uncover historical trends and coincidences in Haiti that made the earthquake so lethal and destructive. Haiti has a long history of governmental ineptitude and corruption, both of which Tobin found contributed to the devastation. But she also discovered that the problems wrought by government failures were magnified by an exploding urban population. Haiti’s government and economy were intensely concentrated in Port-au-Prince. All of the country’s eggs were in one sagging, moth-eaten basket. One disaster there would send shockwaves throughout the country. Which, of course, it did.

Haiti, like nearly every other country, has gone from mostly rural to largely urban in the past several decades. But in Haiti, the roots of that trend extend back to the early 1800s. Then, the new republic was centered on Port-au-Prince and Cap-Haïtien, the two major ports, as a result of the country’s export economy. The trend continued in the 20th century. The U.S occupied the country in 1915 after a large number of political assassinations and in the process discouraged peasant farming in favor of other economic pursuits that would ostensibly integrate Haiti into the world economy.¹ When the U.S. left in 1934, Port-au-Prince was filling up. Not long after, concerns grew about the state of housing in Port-au-Prince.

The outlook wasn’t rosy when urban migration picked up in the 1960s. There weren’t enough jobs in the city for the number of people who lived there, but the situation in Port-au-Prince was still better than the countryside. People flocked to the capital at such a rate that by 1996 Haiti’s population was the most concentrated in the world.

The dictatorships of the two Duvaliers—François from 1957 to 1971 and his son Jean-Claude from 1971 to 1986—did little to help. Corruption became ingrained and governance suffered. The countryside was largely forgotten, with the exception of taxation. Under the Duvaliers, nearly 80 percent of government revenues came from taxing peasant farmers. The wealthy, who mostly lived in the cities, were barely touched. Basic services foundered. There hadn’t been a census since the 1950s, and even that one may have been off by as much as 15 percent. Port-au-Prince hadn’t had an official urban plan since the 1930s. Building codes were few, weak, and generally not enforced. Land records were spotty, so people built whatever shelter they could wherever they could find space.

When the earthquake struck in 2010, nearly 30 percent of the country’s population lived in the Port-au-Prince metro area. But even that large number fails to underscore just how deeply the nation relies on that one city. The nation’s government and economy are almost entirely dependent on the capital.

It’s a cautionary tale for countries with keystone cities—England with London, Japan with Tokyo, South Korea with Seoul—and countries with vast slums and impoverished countrysides—much of sub-Saharan Africa, Bangladesh, Brazil. While many countries with vital capitals are better prepared than Haiti—it’s hard not to be, given that the country has consistently ranked at the bottom in terms of infrastructure—a plan for resiliency would be wise. Japan, for example, drew up plans for a backup capital after the Tohoku earthquake and tsunami. The proposed location is farther from the coast and higher in elevation.

Haiti, of course, never had the luxury of considering a backup capital—it didn’t even have a functioning primary capital. It still doesn’t. More than three years after the earthquake, over 300,000 people still don’t have permanent homes.² But neither do they have anywhere to go. In Haiti, life is in Port-au-Prince, whether that life is comfortable or not.

Note: Tobin has also written a book, Brush with Haiti, about her research and experiences there.

Photo by the United Nations.