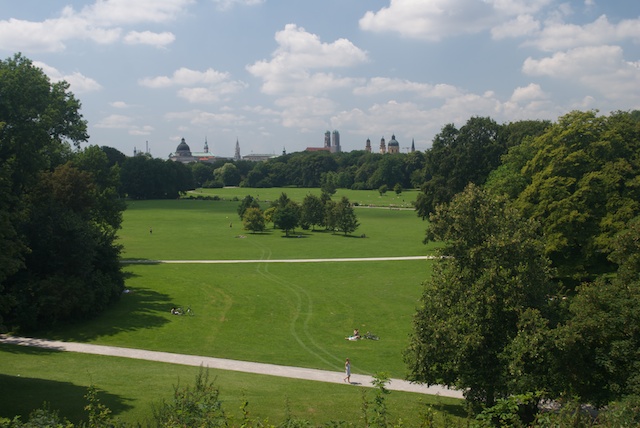 Millionendorf. The Million Person Town, as Müncheners happily call their city. It’s an apt description—Munich is as skilled at masking it’s size as Mexican druglords are at hiding their contraband. The place literally feels smaller than it is, thanks in part to it’s compact footprint. Munich’s sights are easily accessible without a car, and the idyllic German countryside is a short trip out of town. How did the Munich area avoid sprawl while its population boomed? Planning, in a word. Munich and its neighbors have been at it for 60 years.

Munich, by rights and means, should be a car town. Six Autobahnen feed car and truck traffic into the city’s heart, BMW’s world headquarters lie within the city limits, and it has the highest per capita income of all the major German cities. But despite its predisposition to automobiliphilia, Munich is one of the few major European cities which had its population grow more rapidly than its boundaries.

It all boils down to a few decisions Munich made when it rebuilt after World War II. With the city mostly bombed out, planners decided to restore the historical center to its pre-war appearance and layout, forgoing a car friendly grid. In the process, they hemmed in the old town with a ring road to deal with traffic. But the old Munich and the new ring road wouldn’t suffice for long. Just over a decade after the end of the war, the city’s population surged past one million as people flocked to the city from the countryside in search of jobs. Those jobs paid well, and rising affluence led to wider adoption of automobiles. Both of these trends often test the demands of traditional city planning. In most cases, city planners would have done what was easiest—expand.

Instead, Munich city planners took advantage of the newly passed Bundesbaugesetz (federal construction law) to form a city planning commission that oversaw not just urban development, but also economic, social, educational, and cultural interests. By 1963, they produced their first plan and a few years later formed an department tasked with coordinating planning activities and reaching out to research, business, industrial, and residential communities.

Though the plan saw few updates in subsequent decades, its 1988 revival renewed interest in keeping Munich’s footprint small. The relative paucity of sprawl in the Munich area is due in part to city’s desire to maintain its density. The city has encouraged redevelopment of its brownfields: As industries have vacated factories and military installations been abandoned, economic incentives helped fill the gaps with housing, business parks, and industrial parks. Munich’s well-oiled and thoroughly modern mass transit system has also kept residents moving efficiently despite the density. Plus, it’s a treat to ride—trains run frequently, the stations are clean, and the latest interiors of the latest trains benefit from stunning design. Finally, the city has placed an emphasis on open space. Parks like the Englisher Garten (pictured above) line the Isar River in the city, and substantial forest reserves surrounding the city have kept a lid on expansion.

Regional planning in Munich has been less codified, but similarly effective. Most municipalities in the metropolitan area have been a member of the regional planning association since the 1950s. Though participation is voluntary, the organization’s lengthy history has probably contributed to its success in orchestrating regional growth. While many similar metro areas in Germany and throughout Europe have expanded outwards, the Munich region has managed to direct much of its spatial growth to undeveloped enclaves.

Suburbia no more? Not quite yet

“What if” development ran rampant in Silicon Valley?