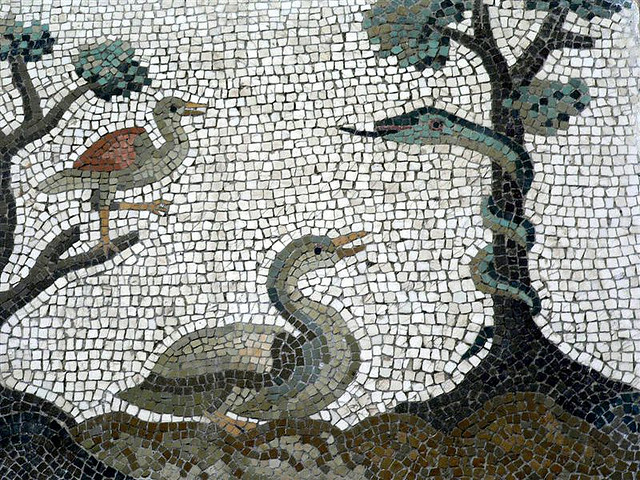 If you want a glimpse of our ecological future, take a look at present-day Europe. Continuous and intensive human habitation for millennia have crafted ecosystems that not only thrive on human disturbance, they’re dependent on it. But even in places where pastoral uses have fallen by the wayside, the ghosts of past practices linger. If you have any doubt that the changes we’re making to the earth right now will be felt thousands of years from now, these two studies should wipe those away.

The first takes place in a post-apocalyptic landscape masquerading as a charming woods, the Tronçais forest. Smack in the middle of France, Tronçais is the site of a recent discovery of 106 Roman settlements. Photographs of the settlements call to mind Mayan ruins in Yucatan jungles, with trees overtaking helpless stone walls. Tronçais was not unique in this way—following the fall of the Roman Empire, many settlements reverted to forest after the 3rd and 4th centuries CE.

Ecologists studying plant diversity in the area noticed two distinct trends. First, the soil became markedly different as they sampled further from the center of the settlements. Nearly every measure of soil nutrients declined—nitrogen, phosphorous, and charcoal were all lower at further distances. Soil acidity declined, too. Second, plant diversity dropped off as sample sites moved further into the Roman hinterland, and likely a result of changes in the soil.

The researchers suspect the direct impacts of the settlement and Roman farming practices are behind the trends. High phosphorous and nitrogen levels were probably due to manuring. The abundance of charcoal is clearly from cooking fires, while soil pH was affected by two uses of lime common in the Roman empire—mortar used in building and marling, the spreading of lime and clay as a fertilizer. The combined effects of these practices fostered plant diversity after the settlements fell into ruin, the effects of which can be seen to this day.

The second study was undertaken by another group of ecologists who canvased grasslands in northern and western Estonia. While threatened today by the usual suspects—intensive agriculture and urbanization—the calcareous grasslands of Estonia have a long history of human stewardship which helped a wide variety of grasses and herbs to flourish. They were greatly expanded by the Vikings, who settled the area between 800 and 1100 CE. Knowing this history, the researchers suspected population density may have boosted floral diversity. They sampled exhaustively, recording plant species and communities in 15 quadrats at 45 sites for a total of 675 sample plots. They also drew 20 soil samples at each site. To estimate population density during the Viking Period, they used an established model that estimated settlement size and extent based on known ruins.

Soil qualities naturally had an affect on present-day plant diversity, but human population density during and shortly after the Viking Period also emerged as a significant predictor. As with the Roman study, changes to soil nutrients because of human activities are likely behind the results. But that’s not all. The researchers point out that seed dispersal 1,000 years ago also influenced present-day diversity. When the Vikings expanded the grasslands, they connected different patches that had previously been isolated, allowing previously isolated species to germinate in new areas.

These are not the first studies to reveal a shadow of human habitation in present day ecosystems—the Amazonian rainforest is littered with evidence of agriculture before European contact, for example. But these studies show the ghosts of ecology persisting for millennia, not centuries. Not only does it bolster the notion that no landscape is pristine—an idea that has been gaining traction with the ecological community—it should underscore the persistence of any human activity.